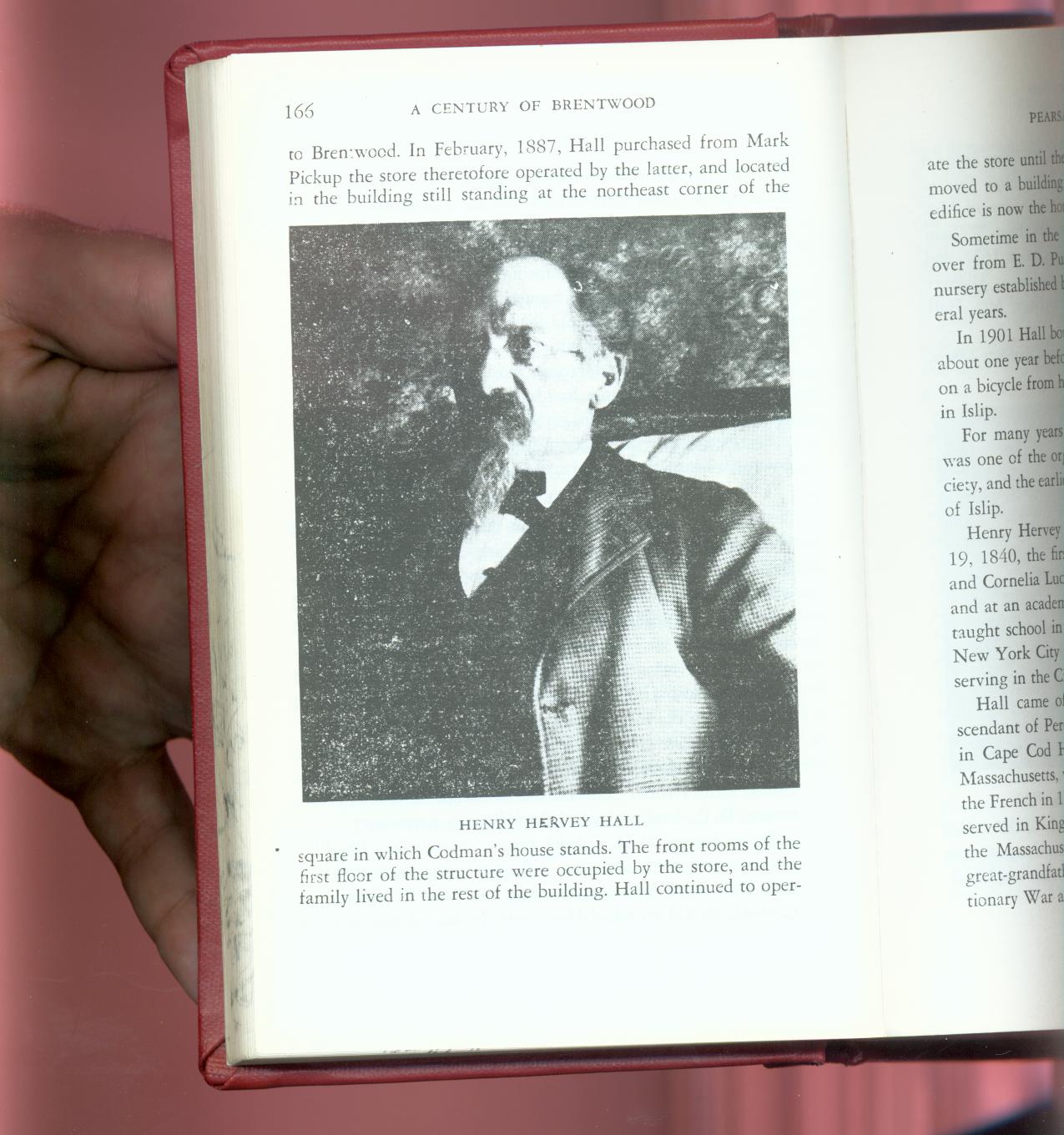 Henry Hervey Hall was born in Spencer,NY,on June 19,1840,the first of the nine children of Henry Smith Hall and Cornelia Lucinda Fisher Hall.He was educated in the Spencer schools and at a private academy in the Hudson River Valley.He taught school in Spencer,then moved to New York City at 21 and became a printer.After serving in the Civil War,he worked with Horace Greeley(one of the religious reformers who helped found Modern Times).

He met Helen Williams Leonard,the daughter of Jessie Williams Leonard and Mary Abbott Leonard.They fell in love and were married on March 20,1873.The Halls had four children:Percy Ledyard,Gilbert Lewis,Mildred Helen,and Mary Cornelia.The Hall family came to Brentwood in August 1886.Thry first lived at the home of Charles Codman,an old friend of Henry's who had persuaded him to move here.In Febrauary 1887,they purchased Mark Pickup's store,which stood at the northeast corner of Codman's property.They continued to operate the store and also lived in the building
that housed it.Henry sold the store in the late 1890s,and it was moved to a building near the railroad depot.

Around that time,Henry and Frank E.Blacker took over the old Richardson nursery,which they ran for several years.
Henry bought the Islip Herald in 1900,and edited it until his death in September 1907.He served on the Brentwood School Board for many years,helped organize the first Village Improvement Society,and was the original clerk of the
Board of Assesors of the Town of Islip.

The Halls were very popular residents of Brentwood.Verne Dyson wrote in "A Century of Brentwood":
"Up to the middle of the eighties,the life of our village had been too often dominated by freakish,bizarre,and unstable social elements.Culture,conservation,and a steadying influence were brought into the community by Henry Hervey Hall and his family in the summer of 1886.To an aristocratic colonial lineage,Hall added learning,a friendly interest in his neighbors and and a devotion to civic affairs.His fine and well-balanced personality was a valuable asset to a community which had suffered from the behavior of erratic or eccentric citizens".

The four Hall children all had happy lives.Percy became successful in banking and real estate,and was active in politics and civic affairs.He married and had a family.Gilbert became a very successful teacher and lawyer.He also married and had children.So did Mildred,who became a teacher in New York City.Mary was also a New York teacher,
and lived with Mildred and her family after retiring.She never married.