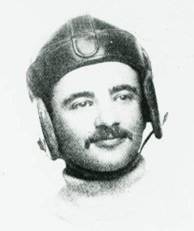 On November 13, 1887, Paul Studenski was born in St. Petersburg, Russia. He attended the University of St. Peterburg and studied law where he graduated in 1908. He was exceptionally intelligent and decided to attend Medical School at the Sorbonne in Paris for a year during this time he became interested in learning to fly. Studenski eventually quit school and spent all of his inheritance on flying lessons. He received his license from the L’Ecole Bleriot in Etampes, France on November 8, 1910. During the winter of 1910 – 1911, Studenski flew a Gremaud at Pau, an experimental monoplane. Then in 1911 he decided to immigrate to the United States. For awhile he made a living working the circuit as a barnstormer. He worked at several companies as an instructor. He was the first pilot to transport mail in the South by plane. Later on in 1913, Studenski retired from aviation at the request from his wife Esther. Studenski returned to school in 1915 and he attended New York University for the next two years. He received his doctorate from Columbia University in 1921 and began his career teaching economics at New York University. In 1955 he became Director of the Albany Graduate Program in Public Administration for the next two years. He also was a consultant to many notable government leaders such as New York Governor Thomas Dewey and President Franklin Roosevelt. He authored many books on economics. He died on November 2, 1961 at the age of 73. He was survived by his wife, daughter and son. He moved to Brentwood in 1938 where he had a Cape Cod built by noted architect Olive T. Tjaden and lived there until his death. His papers are located at the Smithsonian Institute Archives. M. Koferl -- January 2008 -- Local History Newsletter Paul Studenski Paul Studenski Collection Finding Aid