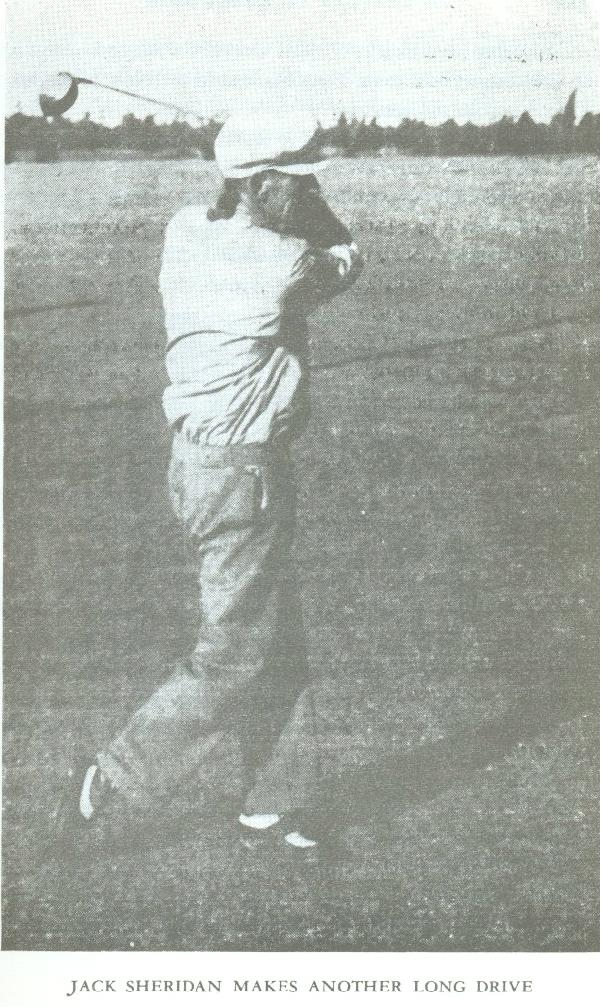 There’s something about the Brentwood Golf And Country Club that I’ll bet you didn’t know. The Club once had a popular professional golfer as its manager. His name was Jack Sheridan. I’d like to introduce him to you now. Jack was born in Dublin, Ireland, in 1902. He developed an interest in golf at an early age, and became an excellent player. At thirteen, he became a caddy for many Irish celebrities while also studying club making and course design. Jack quickly became a rising star in Irish golf, and he was resident professional at several courses. He came to America in 1929 and did well here, winning several tournaments and becoming a successful resident course pro/manager in New Jersey. Jack also met and married fellow Dublin native Patricia Kough in 1930, and they had a son. But the Depression brought bad times, and Jack fell into obscurity. He taught at a New York City golf school, and then at a driving range in Freeport, L.I. The Sheridans came to Brentwood in 1933. Almost immediately, Jack was hired as manager of the Brentwood Golf And Country Club, which had been floundering for several years. It was a smart move, because over the next sixteen years Jack completely turned the Club around and made it a huge success. He redid and modernized the golf course, making it one of the best and most popular on Long Island. Under his guidance, his club drew nearly 400 golfers on weekends at its peak in the late 1940s. Jack also continued to be a very successful player during this time. He and Erwin Hedges won the Long Island Amateur-Pro Golf Tournament in 1950. N. Ziino -- Local History Newsletter -- June 2008