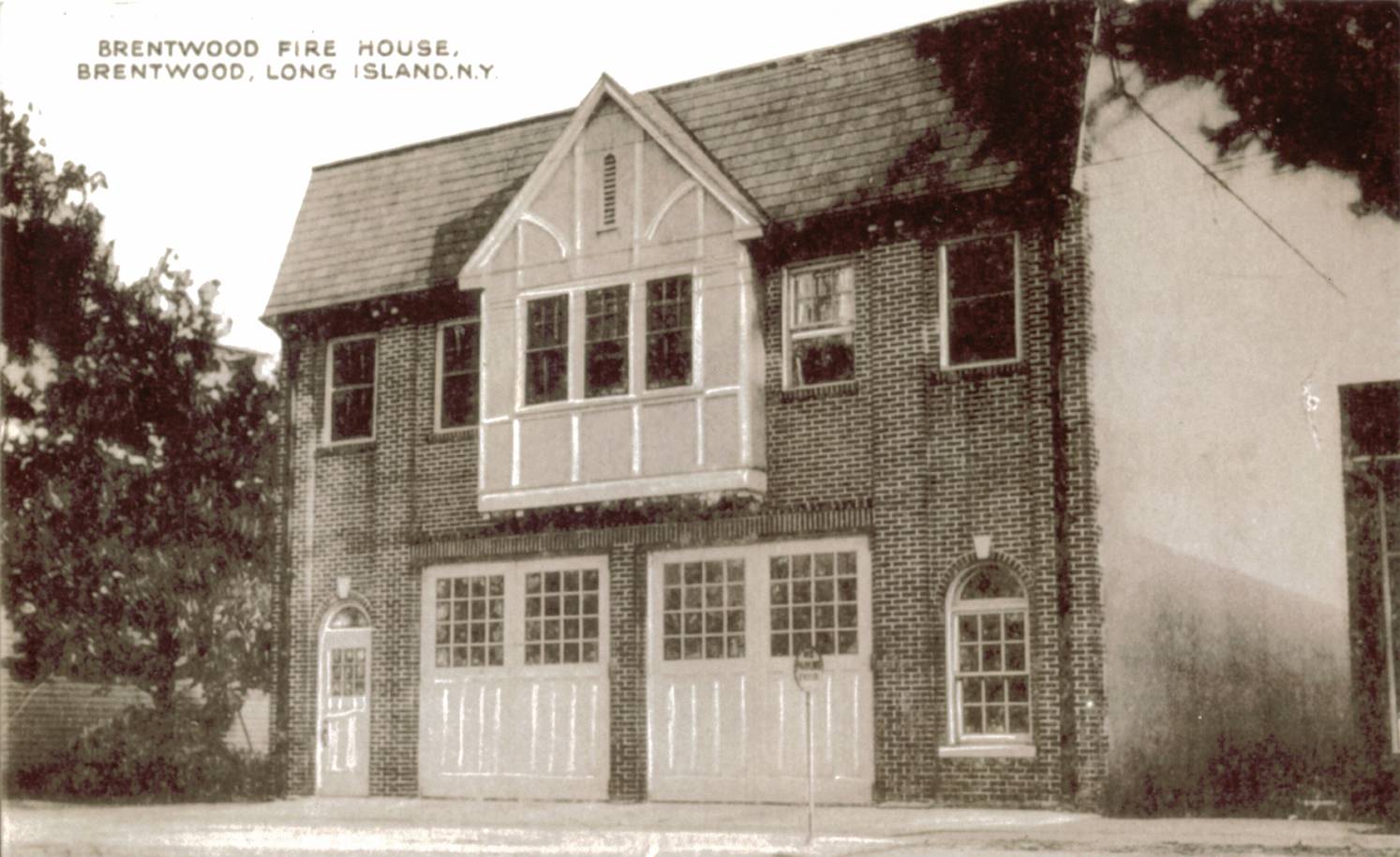 The alarm goes off. You see the lights flashing and hear the siren wailing. Then it comes into full view- a large red fire truck racing to help someone in distress. And on it you see the name in big block letters: “Brentwood Fire Department”. The Department covers an area of 24 square miles in Brentwood, North Bay Shore, Edgewood, and Baywood. It’s bordered by the Long Island Expressway (north), Southern State Parkway( south), Route 111(east),and the Sagtikos Parkway (west). It consists of six Engine Companies, one Ladder Company, and one Service Company. The Department responds only to fire calls, about 1,600 each year (Brentwood Ambulance handles about 7,000 emergency calls a year). It all started in 1898,when a group of Brentwood residents came together to protect the community from fire. Though there were not many house fires, there was a major problem with brush and forest fires that threatened homes. At first, the group only had whatever basic equipment they could find, such as buckets and axes. They had no trucks or formal organization. But on August 28,1899,they purchased land from Mrs. Elvira S. Studley and incorporated the Brentwood Fire District. A fire house was built in 1900,and a used fire truck and apparatus were then purchased from Islip. Thus, the Brentwood Fire Hook & Ladder Company no.1 was created. At that time, the Fire District was one mile in each direction from the Fire House. But they did fight fires outside this area. In these early years, reporting a fire could only be done by striking a metal ring on a pole outside the Fire House (there were very few telephones in Brentwood). Over the years, thanks to successful fundraising, the Department was able to grow and purchase better equipment. It was reorganized several times and became the Brentwood Fire Department in 1932. The Fire District was enlarged in 1938,while the village’s first fire hydrants were installed a year earlier. Since then, the Department has continued to provide invaluable service to the Brentwood community. Among the many disasters it has handled: A 1904 fire that destroyed the railroad station, a major brush fire that destroyed hundreds of acres between Broadway and Islip Avenue in February 1963;a huge woodland fire in July of that year; a gasoline tanker accident at Wicks Road and the LIE and a major train wreck west of the Sagtikos Parkway in the 1970s;and the tanker accident that melted the Sagtikos Parkway bridge on the LIE in October 1994. Tragedy struck the Department on May 4,1952.Three members-Charles Elliott, Martin Ames, and Andrew Wittman, Jr.-were trapped in their truck during a raging woods fire near Pilgrim State Hospital Ames and Elliott were killed, while Wittman survived,although he was badly burned. The truck was destroyed. The monument in front of the firehouse on Fourth Street is dedicated to these three heroes. N. Ziino May 2007 -- Local History Newsletter

The Brentwood Fire District was incorporated August 1899, and the Fire Department was formed in the same year. The Department was first known as the Brentwood Hook and Ladder Company. They built a small frame Fire House on First Avenue with money that they borrowed from Dr. Ross. The size of the Fire District was one mile in all directions from the Fire House, however many fires were fought in the hamlet of PineAire and in what is now known as East Brentwood. There was a large bell on the Fire House that sounded the alarm to alert firefighters (Vamps) about a fire. The Vamps would have to run to the Fire House and pull the Hook and Ladder Truck to the fire. Sometimes they were lucky to have a farmer show up with a team of horses to pull the truck. In 1926 the Department was reorganized and Theodore Freund was elected as its First Fire Chief. The firehouse was modernized and a motorized truck was purchased with a loan from Dr. Ross. On March 30, 1928 the firehouse burned down and many of the records were destroyed but the old Hook and Ladder and the new Chemical Truck were saved. The old building was replaced with a two story brick house on the same site which still is in use today on First Street across from the old train station. The brick fire house is still being used today for physical fitness training and for fire prevention offices. In 1929-32 the department answered between 38-46 alarms, the majority of these being Brush and Woods fires started by Steam Engines of the Railroad. The volunteers did not have the Pumpers carrying hundreds of gallons of water and the booster hoses we have today. They fought fires with Indian cans, extinguishers and brooms. Some fires lasted for days. For nine years, 1945-1954, the Department’s most active member was a Dalmatian dog named Smokey. Smokey lived with fireman Bill Plage on Madison Avenue and when the alarm sounded, Smokey would race from home to the fire house. Usually he was the first one there. Smokey would ride in the front seat of the first truck out and he would choose who would drive and who wouldn’t. At house fires he would be the first one up the ladder…but…someone would have to go up and bring him down. At brush fires he would jump off the truck and put the first water on the fire. Smokey had a son named Booster, who did not share his father’s enthusiasm; preferring to stay home and sleep. In 1955 a new Fire House was built on Fourth Street, around the corner from the old firehouse. The new firehouse is used for the Dispatcher’s office, the fire engines and all the fire equipment. The old firehouse is used for fitness training and fire prevention. As the size of the fire district increased to 22 square miles, it was necessary to form several companies. As of 2007 the Brentwood Volunteer Fire Department has five engine companies, including its headquarters on Fourth Street, that serve approximately 24 square miles covering Brentwood, North Bay Shore, Edgewood and Baywood . In 1998 the department celebrated its 100th year of service to the Brentwood community. A. Bennett --May 2007--Local History Newsletter